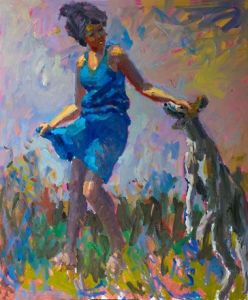 This is Kevin Sinnott’s twelfth solo exhibition at Martin Tinney Gallery since he moved back to Wales in 1995. Kevin is a contemporary Welsh artist with a truly international reputation. He was born in Sarn, South Wales in 1947 and trained at Cardiff College of Art & Design, Gloucestershire College of Art & Design and at the Royal College of Art, London. He remained in London throughout the 1970s and 80s, building a very successful career, exhibiting at leading London galleries, major galleries in the USA and mainland Europe.

After returning to Wales in 1995 he quickly established himself at the forefront of the renaissance in Welsh painting. While his work is primarily concerned with human relationships, the influence of the Welsh landscape is strongly felt in his paintings. He was elected to the Royal Cambrian Academy in 2007.

Kevin Sinnott's work is collected worldwide and he is represented in many important public collections, including The Metropolitan Museum of Art, New York and The National Museum of Wales.

There are approximately thirty new paintings in the show and all are for sale.