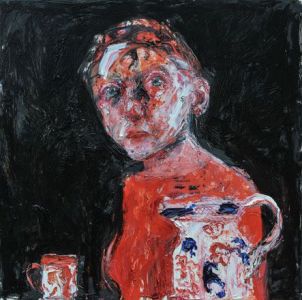 Shani Rhys James is arguably the most exciting and successful Welsh artist of her generation and her considerable reputation, both in Wales and beyond, continues to grow apace. In recent years, her work has been included in a number of prestigious exhibitions in Britain and abroad and she has garnered much serious critical acclaim in the national press.

Born in 1953, Shani trained at St Martin's College of Art and Design. She is the recipient of numerous prizes and awards including The Jerwood Prize, The Hunting Prize, The National Portrait Award, The Mostyn Open, the Gold Medal at the National Eisteddfod and Welsh Woman of Culture. She was awarded an MBE in 2006. Her work features in many important private and public collections.

The art historian Edward Lucie-Smith has spoken of her work as the "theatre of the self", explaining that she turns domestic scenes into "some unapologetic assertive epic". Bill Packer, the eminent art critic, has described Shani as ‘an extraordinary artist and one of the most remarkable painters we have’.

Shani has been exhibiting with Martin Tinney Gallery since 1992 and has been one of our most loyal stalwarts ever since. This is her tenth solo show with the gallery and she has been in numerous exhibitions with us in Cardiff, London and abroad, notably San Francisco and Brussels.

The artist who gazes at herself uncompromisingly for information about the face neither paints self-portraits nor interiors, nor even still-lifes, but the psycho-dramatic moments. The objects and sights, like metaphysical art works, are also just as carefully looked at. They are vividly transmitted, not seductively but in an uncomfortably fascinating frankness of direct gestures. Human figures convey the idea of 'the Other' and the other person's 'look' of self-consciousness.  Ivor Davies 2017